Young Women and Osteoporosis — Good news about treatment and prevention

Osteoporosis and broken bones are an old woman's disease-right? No, that is not right! Young women do get osteoporosis-although rarely.

The sooner we understand that young women can and do fracture bones and develop osteoporosis the better. Also, the sooner we accept that the bone we build in our childhood and teen years provides a "bone bank" from which we can borrow in older age the better.

The purpose of this article is to make osteoporosis in young women real through a story of a woman who has it, to review the unique reasons why young women may have fractures, and finally, to discuss the good news about treatment. The real importance of this article is to stimulate young women to do the simple, common sense things that will build strong bones now and prevent osteoporosis later. For a picture of normal bone strength across our lives, see Figure 1 below. 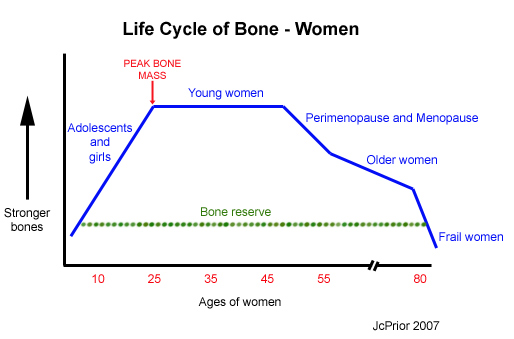 Sally is healthy and works hard to stay that way. One day while working as a waitress, she was rushing from the kitchen with an order and slipped on spilled gravy. She landed hard on her tail-bone on the tile floor and experienced a sudden, severe pain in the middle of her upper back.
She was sent to the hospital and an X-ray showed a crushed spine bone in her upper back. She was given pain-killers and told that it would take one to three months before the pain went away. Her doctor ordered a bone density test that showed a low spine bone density but normal bone density in her hip. She asks, "Why did I break my back?"

To answer her question, her doctor reviews what they know about her risks for osteoporosis. She has no family history of osteoporosis or a fracture in her parents, grandparents or brother. Her first period came when she was 12 and a half. After some usual irregularity, her periods became regular until she was 16 and broke up with a boyfriend. She then skipped periods for 3 years and lost a lot of weight. "Looking back, I think I had anorexia," she says. She has never been pregnant or used the Pill- she and her common law partner use condoms during sex. She exercises by doing kick boxing twice a week, and commutes by bicycle to and from work. She drinks 3 glasses of milk a day and usually has yogurt before she goes to bed. She has never smoked, avoids coffee and colas, and drinks less than one beer or glass of wine a week. The only things she takes are a multiple vitamin and some ibuprofen for cramps.

When her doctor, we'll call her Dr. Andrews, checks her, she finds that her weight is normal for her height, giving a body mass index of 24 (normal is 18.5-25). Her breasts are small, somewhat lumpy and the areola (darker circle around the nipple) is about the size of a quarter. The rest of her physical is entirely normal.

What are Sally's osteoporosis risk factors?

Dr. Andrews asks, "Do you ever worry that what you eat may cause you to gain weight?" Sally answers slowly, "Well, I only eat low fat and organic food-I'm careful because I want to be healthy and not get fat." These answers suggest that she has what is called "Cognitive Dietary Restraint" which means that she feels each bite and all food must be carefully considered for its potential to cause weight gain. There is a formal test that can be used to see whether Sally does or does not have "Eating Restraint" (3). For Sally, eating has become stressful. This means that her cortisol levels are likely to be higher than is healthy (4).

Now Dr. Andrews asks, "Can you tell by the way you feel, that your period is coming?" At this Sally looks puzzled. She replies, "Well I usually get cramps the day they start-otherwise I just go by the calendar." This suggests that Sally isn't ovulating and therefore is not making the bone-building hormone, progesterone. (See "Can women tell if they are cycling "egg-lessly?") What other evidence is there, that we already know, suggesting that Sally isn't ovulating normally? (Clue--what about her physical exam, especially her breasts?)

Is it normal for a woman of Sally's age to have an areola as small as a quarter? The answer is no. One of the effects of progesterone on a woman's breast is to increase the size of the areolae so that they become as large as a Canadian two-dollar coin (See Figure 2). Sally has what is called Tanner Stage III breast development-that is similar to breasts in a girl who just began her period! It takes progesterone, and ovulation, to swell the areola to its full size.

If we look again at that bone strength diagram (Figure 1) we can put Sally on the graph with a star showing her peak bone mass was low (because of amenorrhea) and that she has since lost more bone because she is not ovulating normally (5). As well, she probably has higher cortisol levels related to eating restraint that are wiping out the benefits of her good exercise (6).

What can Sally and Dr. Andrews do now to Treat Osteoporosis?

Before talking about treatment, it's important emphasize and give Sally credit for all the things that she is currently doing right! She is physically active, her weight is normal and steady, and she's getting good amounts of calcium and vitamin D. She also has good habits-no cigarettes, little alcohol and no coffee or colas. A tool kit of the ABCs of Osteoporosis Prevention in Premenopausal Women is available here [pdf].

Now, it's time to see what can be done to help her stop losing and start gaining bone so that she can "catch-up" with her biological potential.

An essential part of treatment is helping Sally to feel she is not alone. Other young women like her have had fractures and been told they have osteoporosis. Sally also needs realistic reassurance that she is not condemned to be stooped and breaking bones throughout her lifetime. With fine-tuning of her current health habits and improved ovulation, she can gain bone and never again have a fracture. The two things that need addressing date back to her teens, and relate to her anovulatory cycles. Although Sally has eating restraint, she has made major progress since her anorexia-her weight is normal, she feels comfortable at her current good weight, and she has regular cycles. A good family doctor will assist her to talk about her concerns, suggest she see a councilor and learn relaxation and yoga breathing to control her sense of threat or stress.

To gain an understanding of, and "take charge" of her menstrual cycle, it would be helpful for her to use the daily Menstrual Cycle Diary and perhaps even take her first morning temperature with which she can figure out if she ovulating and if the luteal phase (high progesterone time of the cycle) is long enough. For example, in a one year study of 61 young women with absent or abnormal menstrual cycles, we found that 29 of these women developed normal menstruation and ovulation by the end of the year. This recovery is probably because of tracking their own cycles and ovulation and the support of talking about their periods (7).

To increase new bone formation, and perhaps also assist her own cycles to become ovulatory, treatment with cyclic natural progesterone (Prometrium)-the hormone that is missing because she is not ovulating-is very important. Progesterone stimulates the bone forming osteoblast cells to work harder and make more bone (8). Prometrium, or compounded oral micronized progesterone, needs to be taken in a dose of 300 mg at bedtime for at least 14 days every month. It works best if it is taken when a woman's body normally produces progesterone, that is, during the last half of her menstrual cycle . Because Sally's cycles are regular and about 31 days long, progesterone taken on cycle days 16-29 will be appropriate. The study of 61 healthy young women with disturbed or absent menstrual cycles who took progesterone in the form of medroxyprogesterone (MPA), for only 10 days a month, showed that it could cause a highly significant gain in bone (7). The women taking cyclic MPA had an average gain in spine bone of about 2% a year, while women on placebo had a loss of about 2% per year (7).

Sally may ask whether or not she needs some additional treatment besides cyclic progesterone to prevent osteoporosis. That's an important question. It is inappropriate to treat her with estrogen while she can make her own. Giving estrogen would suppress her own fragile menstrual hormonal system (and estrogen therapy doesn't increase bone density in premenopausal women anyway! (9)). The common osteoporosis medicines, called bisphosphonates, are not safe or appropriate in a woman who could become pregnant. Instead, Sally should increase her elemental calcium and vitamin D to the maximum safe amounts. For calcium, that amount is 500 mg from food or supplements with each of three meals and at bedtime. This means a total of 2,000 mg/day of elemental calcium from food and supplements (it is safe to 2,500 mg/d). For vitamin D3, the safe upper limit is 2,000 IU/day. Vitamin D can and should be taken once a day-Sally can achieve close to that by adding a 1000 IU vitamin D3 pill to her current multiple vitamin that is providing 400 IU of vitamin D a day.

If Sally continues to experience significant spine pain, an appropriate and safe treatment is one that often decreases pain and may also prevent further spine fractures. This medicine is calcitonin that is taken as a nasal spray and called Miacalcin. Obviously Dr. Andrews will repeat Sally's bone density test in two years. I expect, if she follows the plan above, that she will have a 2-8% gain in bone and no more fractures!

What can young women do to prevent osteoporosis?
There are many things that women can do from their teen years onward to prevent osteoporosis. It is especially wise for young women to find out if any relatives have had a fragility fracture. Fragility fractures happen with a fall from a standing height or less. A fragility fracture, like Sally had, means osteoporosis. And a family history means you need to be extra careful to follow the "ABCs of Osteoporosis Prevention for Young Women" . It is especially important to learn to be "easy going" (able to relax and not worry) and to ensure that you have ovulatory menstrual cycles. You can take cyclic progesterone if you are not currently ovulating. Doing all these things, that are essentially living a healthy life, will allow you to never break another bone!

Note: If you are looking for the Young Osteoporosis Women forum, it has been taken offline. Please email cemcor.info@ubc.ca if you have any questions.

My close friend had a complete hysterectomy and has lost interest in sex. Is this hormonal? Will it improve? What can she do?